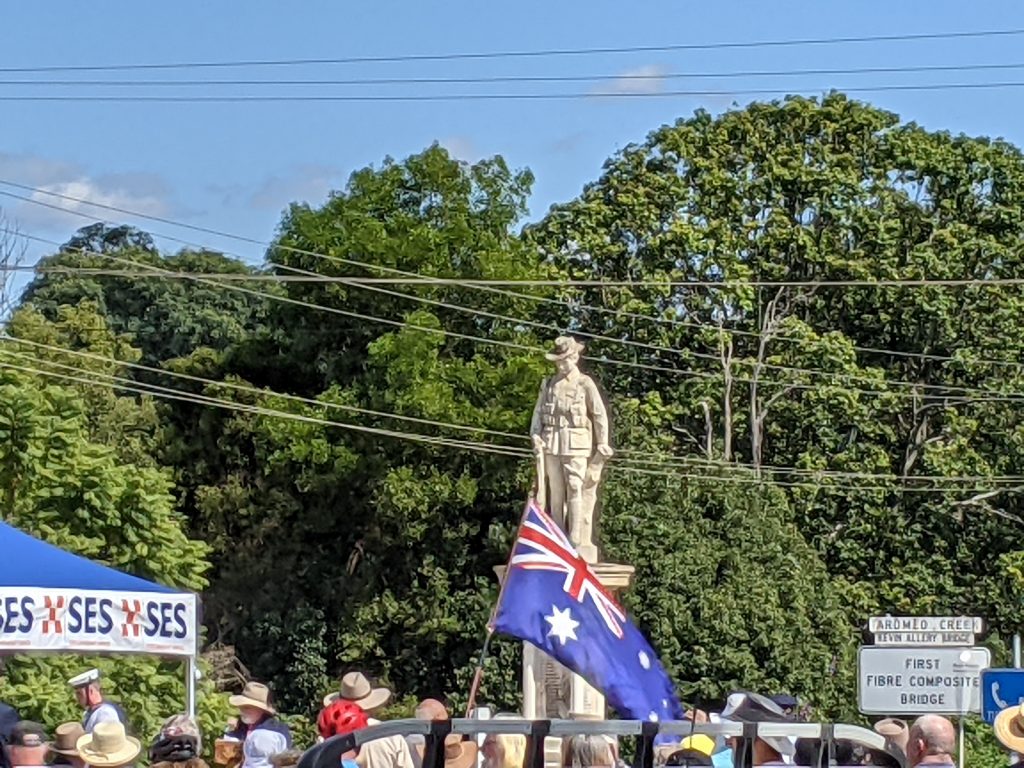 Anzac Day is more than just another day in my househould, it’s the sole day of the year where I am out of bed at 4:00AM. Anything that gets me out of bed at that ungodly hour and doesn’t involve a full bladder must be a special cause.

As usual it’s a visit to the Dawn Service ceremony around the war mermorial in Toowoomba. Given the time of day and season I set off and walk down the hill parting the darkness and slight fog. It’s not until you hit the top of Queens Park that you see other people and realise that it will be another large turnout judging by the hum that comes with a gathering of this size. Normally the fog lifts as the official proceedings begin, as if on cue, to reveal what seems like thousands of fellow residents who have made the similar trek to pay their respects. This year however the fog buggered off early, replaced by a sea of scarves and beanies. The Toowoomba ceremony is commendable but I prefer Gatton’s interpretation of Dawn Service. There is something about a pet rooster and a chorus of barking dogs at the most poignant moment that brings a smile to my face.

I’m proud to say that my Grandfather fought in World War II, a man braver than I could ever dream to be. His Battalion, the 25th, is something of a local legend, as their courage under fire in the jungles of Papua New Guinea inflicted the first outright defeat of Japanese land forces. Understandably he didn’t talk too much about these experiences however every Wednesday his surviving fellow veterans would come to his house with a single beer and play games of pool whilst alternating between tall tales, dirty jokes and their latest medical prescriptions. Memories as vivid as the day they happened. I felt privileged to have been invited into this weekly ritual, even if I was there only to make the numbers, replacing those whose health issues had got the better of them. Learnt more from listening to those conversations around the felt than anything at University those same mornings. The speed of play was slow, their eyesight fading but their minds were still sharp.

The rest of Anzac Day could be spent thumbing through Grandma’s recipe books to find an ANZAC biscuit recipe and whip up a batch before the football starts, but with the shops shut and no butter in the fridge, that would be a futile exercise. Thankfully other plans were afoot, a friend had bought a new car in Brisbane and wanted to get out of the capital city for a day trip to put the new vehicle through its paces. A phone call impossible to say “no” to when the word “bakery” was mentioned. An article about on regional bakeries near Brisbane had talked up the Blackbutt Bakery. A trip such as this is right in my wheelhouse and to be chauffeured in a new car was the tomato sauce on top of the sausage roll. A quick interaction with Google Maps to confirm that Blackbutt hadn’t moved since my last visit some twenty years ago and “Operation Gluten” (Gluttony would probably be more apt) was underway. When a sparkling new Mercedes rolls into my driveway the first challenge was to get into the passenger seat. Which of the 243 buttons on the door moved the seat back? The seat itself surrounds the passenger, to the extent that the seatbelt is nearly surplus to requirements. However the car refuses to move without a fastened seatbelt and as it clicks in a series of sensors activate to tighten the seatbelt to the point where an errant cough could crack my sternum. I feel safe, unable to breathe but at least I’m safe. If my lungs do give out, the state of the art German engineering will ensure my corpse doesn’t roll around in the front of the car like a stray can of beetroot in the boot of my car.

The lady in the sat-nav is super chatty and is struggling to pronounce the unfamiliar regional street names and country towns. This lack of local knowledge meant that I told my friend to dismiss the warnings of “unpaved road in 3 kilometres”. It’s 2021 and an unpaved road between two well known towns was the equivalent of a smashed windscreen from a stone chip – something that your parents mention from a time when television was broadcast in black and white. Add in that there were no warning prompts or noises when we had to dodge three stray horses on the road outside of Crows Nest and Ms Sat-Nav was losing credibility. This changed all of sudden when ten kilometres from our destination we were greeted by a cloud of dust and the said unpaved road. Flanked by National Forest on either side of the road the suspension, tyres and paintwork were being put to the test. A car with a pricetag like this isn’t meant to be bush-bashing. If I turn the music up maybe it’ll drown out the clunks and thuds from outside? “Silver paint doesn’t show the dirt”, I tried to say with some authority to smother my poor instructions. Grasping at straws at this point, the bakery couldn’t appear soon enough.

Blackbutt is a quaint town which was was proud to show off the effect of the recent rain. Roads were in the process of getting closed off for the town’s second Anzac Day parade of the day. Patriotic citizens dusted the cobwebs off the plastic chairs and claimed prime viewing spots on the corners of the street. The smartest locals had made their way to to the top storey of the pub for the best vantage point. Having the height to allow me the ability to see over most of the crowd, my priorities lay at the end of the bakery queue which snaked down the stairs and out onto the footpath.

It wasn’t too long before we had made it up the stairs and into the store, greeted by our reflections in the cabinets. It was a glimpse into our future, likenesses were semi-transparent giving the impression that our bellies were full of racks of sweet treats. The wide range of items on sale meant that I must have changed my mind fourteen times prior to the crucial moment of ordering. “When unsure, buy everything in the store” was my approach. Savoury and sweet, hot and cold. Nothing was off limits on this special day. It would unAustralian not to pay homage to the ANZACs without a pie in one hand and a sausage roll in the other. The sacrifices I make for this nation!

We had to vacate the bakery as the parade was to about to commence. A blow-in like me could not be left unsupervised with the temptations in the cabinets. We joined the entirety of the town which had come out to honour those who fought for our freedom. Kids donned their school uniform on this Sunday and they were joined by people on horseback, service people and volunteers from local clubs in the march down the main street. Music from the 1930’s blasted out from the PA system as proud relatives of servicemen and women wore medals to ensure that their sacrifices will never be forgotten. A retired veteran from Toowoomba was the main guest speaker and it felt like he described every piece of ammunition that was fired in each conflict. His voice similar to those you hear on the old newsreels, elocution which reflected the serious subject matter of the day. Say what you want about Blackbutt, but you cannot accuse the organisers of the parade of not being thorough. The main speech clocked in at twelve minutes and the national anthems for both New Zealand and Australia were played. All the national pride in Coulson Street soon evaporated as soon as the second verse of Advance Australia Fair was played, replaced by confused faces and humming. Add in the wreath laying, the red-faced bugler banging out the Last Post etc it was nearly an hour before we were headed back to the bakery for the second wave. It was a stupid idea as I had one bite of a slice and decided to wave the white flag, the remainder to be taken home for dessert. However my friend was more sensible than I was on our first visit and needed something substantial before the trek home.

The return trip to Toowoomba was much smoother. I knew what to expect from the handsy seatbelt and we decided to take an alternative route via Yarraman and skip the unsealed road. The chocolate base of my half eaten pineapple slice had melted from my body heat, seeped through the paper packet and begun pooling in hands. The challenge for the remainder of the trip was to ensure that the chocolate was contained and didn’t get acquainted with the Italian leather upholstery. Pleased to say that once we stopped for fuel on the outskirts of Toowoomba I thought the best course of action was to polish off the slice, rinsing the chocolate off with the watering can at the bowser. Surprising how many raised eyebrows you get when licking your hands standing in front of a Mercedes, surely I’m not the first?

Back at home I rolled out of the car just in time for the football to start, feelling sick in the stomach. That uneasy feeling was from the volume of calories but it was made worse when I realised that I probably should have skipped the Turkish Delight slice given the history of this sacred of days.

Thank you to the people of Blackbutt for their hospitality and community spirit, it will stay with me for a while, probably on my hips.

PS. I’ve just realised that the slices were upside down. Chocolate should be pointing to the sky! 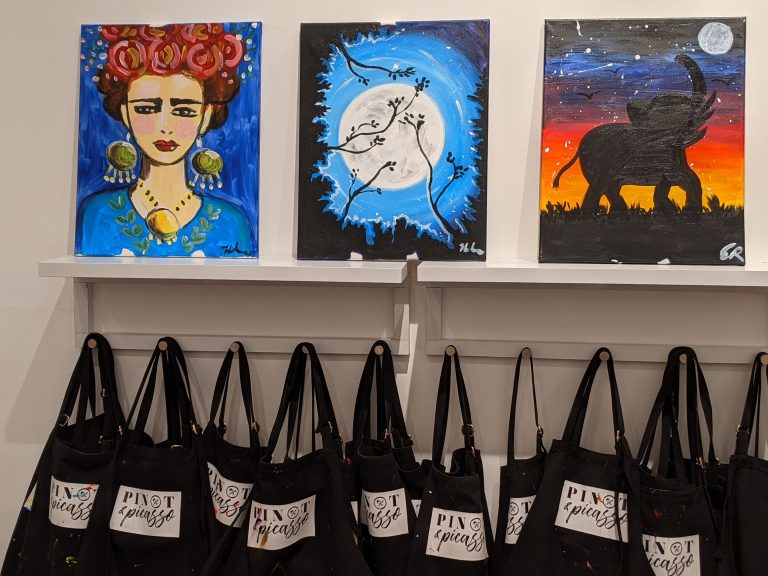 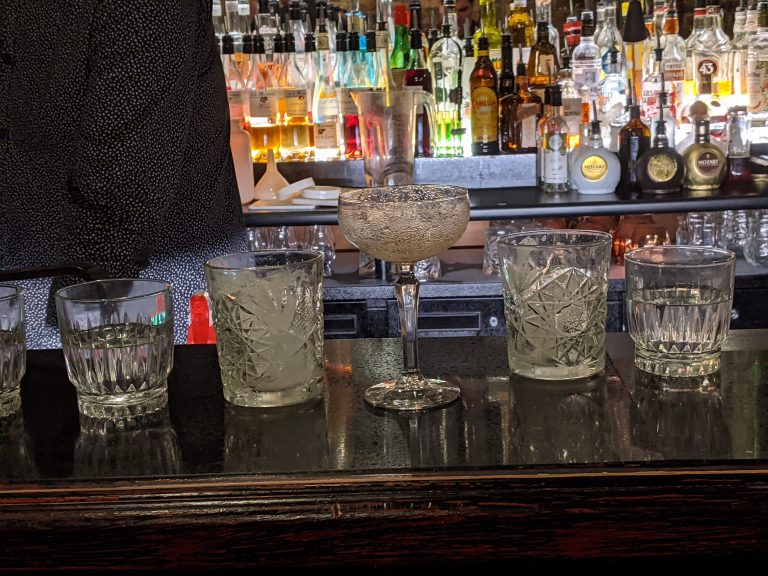 There is only so long you can eat hummus out of a jar with your index finger, so it’s time for Plan B.